Flipitytoons is a collection of cartoon characters created by Efrain Islas. Using insects as the main theme, the stories are told in comic strip format. Flipitytoons takes you on a nostalgic look of a more innocent but irreverent time at the height of American Animation during the decades of the 1930's and 1940's. It offers entertainment that is suitable for the general public, but will be especially appreciated to animation/cartoon purist.

Special attention to detail was taken to achieve this goal. The distorted backgrounds offer a surreal view of the Flipitytoons universe. The art style of annimation used in this 2-D format of comic strips, suggest of a world of insect characters always in motion.  The influence of the polished "disney" look of their character designs and the exagerated personalities of  the Warner Bros. animated cartoon characters can be seen throughout Flipitytoons as it attempts to build upon their legacy. 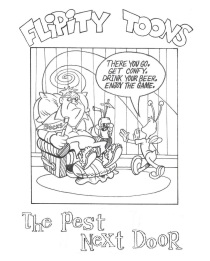 Ever since 1995, Flip has been "The Pest Next Door". Check out this ongoing comic strip series in the Fly On The Wall section. 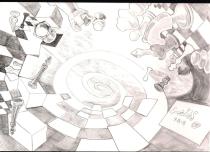 Round and around Flip goes, where he stops nobody knows... well, Flip is most likely landing on the wrong wall! This is the theme of Flipitytoons new comic strip series celebrating Flip the Fly 20th Anniversary! Check out the section titled "A Fly On The Wall".